The Kennet & Avon Canal has awesome examples of canal engineering. At Caen Hill, you can see the longest continuous flight of locks in the country.

They are situated between Rowde and Devizes in Wiltshire. 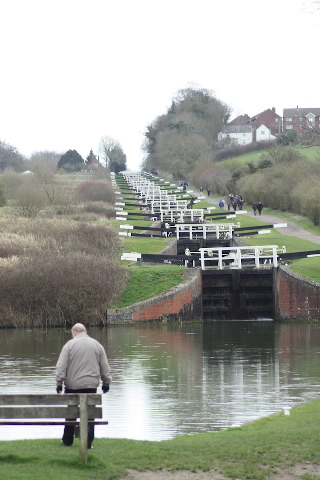 Because of the steepness of the terrain, the pounds between these locks are very short. As a result, 15 locks have unusually large sideways-extended pounds, to store the water needed to operate them. A final six locks take the canal into Devizes.

The side ponds next to the locks are an excellent wildlife habitat. The resident Kingfisher can often be seen, Dragonflies and Butterflies fly overhead, and fish leap out of the water and dart through the reeds.

This flight of locks was engineer John Rennie's solution to climbing the very steep hill, and was the last part of the 87-mile route of the canal to be completed. Whilst the locks were under construction a tramroad provided a link between the canal at Foxhangers to Devizes, the remains of which can be seen in the towpath arches in the road bridges over the canal. A brickyard was dug to the south of the workings to manufacture the bricks for the lock chambers and this remained in commercial use until the middle of the 20th century.

Clay that occurred about half way up the flight on the south side of the canal was used in a specially constructed brickworks to make the bricks to build the locks as well as the in the construction of the Bruce Tunnel further east. This canal tunnel was built under the southern edge of the Savernake Forest. The then Earl of Ailesbury, the owner of the estate, would only allow the canal across his land if it was put underground which delayed construction of the canal even further. The brickworks remained in use until the middle of the 20th century.

Because a large volume of water is needed for the locks to operate, a back pump was installed at Foxhangers in 1996 capable of returning 7 million gallons of water per day to the top of the flight, which is equivalent to one lockful every eleven minutes.

In the early 19th century, 1829–43, the flight was lit by gas lights. After the coming of the railways, the canal fell into disuse and was closed. The last cargo through the flight was a consignment of grain conveyed from Avonmouth to Newbury in October 1948. 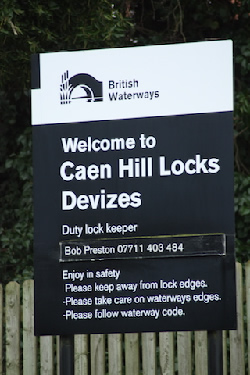 From the 1960s there was a major clearing and rebuilding operation, culminating in a visit by Queen Elizabeth II in 1990 to open the new locks officially, although the flight had been navigable for a number of years before then. In 2010 British Waterways planned to install sixteen new locks gates in twelve weeks as part of its winter maintenance programme, in an attempt to reduce the amount of water lost.

The exceptionally cold weather delayed work, and when the section was re-opened at Easter 2010 only twelve pairs of gates had been dealt with. The wood from the old gates was donated to Glastonbury Festival and used to build a new bridge which was named in honour of Arabella Churchill, one of the festival's founders.